The lineage of Pema Lingpa dates back to the 8th century, to the time when Padmasambhava, Guru Rinpoche, first brought Vajrayana Buddhism from India to the lands of Tibet and Bhutan. Though able to subdue pervasive negative forces – both cultural and mystical, Guru Rinpoche could foresee obstacles that would hinder the Dharma in coming generations, when the teachings would become confused and separated from their essential instructions. To mitigate this, he blessed the region with termas (hidden treasure-teachings) to be revealed in the future for the benefit of sentient beings.

During his time in Tibet, Guru Rinpoche prophesied who the tertons (treasure-revealers) would be, as well as the appropriate time and circumstances for the terma to be discovered. These esoteric teachings were secreted in the varied landscape of the Himalaya among the mountains, cliffs, trees, rivers, lakes and caves, as well as in the very mind streams of disciples who, as reborn spiritual masters, would be led to discover the terma through dreams, visions, and spontaneous realization. There have been many hundreds of tertons up to this present day who have revealed thousands of these concealed teachings of Guru Rinpoche. Among them were the five great Terton Kings, of whom Orgyen Pema Lingpa was the forth.

In Tibet, the legacy of Pema Lingpa began with the death of Lacham Pemasel, the daughter of King Trison Detsen, who died unexpectedly in her eighth year.

Upon noticing the king’s great sorrow over his only daughter’s death, Guru Rinpoche drew princess Pemasel’s consciousness back into her body. When she had regained awareness, Guru Rinpoche transmitted to her the secret doctrine of the Khandro Nyingtig, or Heartdrop of the Dakini, and empowered her to reveal those teachings in a future life. He also blessed her from his heart and gave her the prophesy that in a future life she would be reborn as the Terton King Pema Lingpa, and she would reveal his hidden teachings related to the cycles of the three heart practices of The Lama Jewel Ocean, The Union of Samantabhadra’s Intentions, and The Great Compassionate One: The Lamp that Illuminates Darkness.

Princess Pemasel revealed the Khandro Nyingtig teachings and taught on them extensively in her next incarnation as Pema Lendreltsel, who later took rebirth as the great master Longchen Rabjam. Pema Lingpa was the direct and sole incarnation of the omniscient Longchenpa.

Born amidst auspicious signs in 1450, in Bhutan’s Bumthang Valley, Pema Lingpa was a descendent of tantric practitioners of the Nyingma Lineage. His formal religious training was not extensive, but from his early adult years onward his dreams and visions became the source from which he received instructions to extract 108 great treasures–texts and relics throughout Bhutan and parts of Tibet and India. However, due to the karmic disposition of beings at that time, Pema Lingpa revealed only 32 of the prophesized treasures.

Pema Lingpa’s sizable collection of texts, “The Precious Collection of Profound Treasure Teachings of the Great Master Pema Lingpa” consists of twenty-one volumes, including fourteen major treasure cycles as well as “ordinary” compositions by the tertön and later masters.

The majority of treasures revealed by Pema Lingpa contain empowerment and practice manuals associated with Mahayoga Tantra, and there are also three substantial Atiyoga cycles. The collection contains various texts, an amalgamation of narratives, instructions and rituals.

Pema Lingpa is known as one of the five great Terton Kings, because, among the other treasures, he revealed the three most important cycles of teachings and practices: the cycle of Guru, the cycle of the deity of compassion – Avalokiteshvara, and the cycle on Great Perfection – Dzogchen.

The cycle of Guru is one of the most important and famous treasures, discovered by Pema Lingpa. It is called Lama Norbu Gyatso, or Lama Jewel Ocean.

This cycle is fully associated with Guru Padmasambhava and contains lots of teachings, practices and rituals. Pema Lingpa has revealed this terma from the Lion-Faced Cliff at Mendo in Lhodrak, Bhutan.

The first part of the cycle contains a series of instructions on various topics, in the form of dialogues between Guru Rinpoche and his devoted disciples, such as Prince Mutik Tsenpo and Princess Pemasal. A series of tantric initiations and practice manuals occupy a central place in the cycle, including the root text of the cycle, an Atiyoga empowerment. At the end of this cycle there is an array of different rites, such as smoke offerings, consecration ceremonies, funeral services and rain making instructions.

The Avalokiteshvara cycle – “The Great Compassionate One, The Lamp That Illuminates the Darkness” was discovered from the indestructible enclosure of the Copper Cave of Rimochen, Bhutan.

One of the Great Perfection cycles revealed by Pema Lingpa is Künsang Gongpa Kündu – “Great Completion, The Union of Samantabhadra’s Intentions”. The first part of this treasure was revealed from the stupa at Chimphu near Samye, in Tibet. Another part was rediscovered in Tharpaling near Bumthang, it was previously revealed and hidden again by Longchenpa.

This cycle contains the swift and profound path that allows to attain liberation within one life.

The other two of the Great Perfection cycles are “The Quintessence of the Mysteries of Luminous Space” and “The Small Child Tantra”.

Each Ati cycle has a different emphasis and the three together function as a unit. Each cycle is depicted as emphasizing a single genre: instructions, empowerments and tantras respectively.

The first volume of The Quintessence of the Mysteries of Luminous Space is almost wholly taken up with empowerments. The second volume includes an interesting array of scattered texts including advice on the yogic art of swift walking, protection against demons and guidebooks to hidden lands.

The entire volume of The Small Child Tantra consists of tantras and commentaries, related to an important section of The Collection of Nyingma Tantras on the “Seventeen Unsurpassed Secret Tantras of Dzogchen” (Yang gsang bla na med pa rdzogs pa chen po’i rgyud bcu bdun gyi skor rnams, volumes 9 and 10 of the Nyingma Gyubum). This cycle is considered a “rediscovered” treasure (yang gter), originally revealed by the tertön Sherab Membar.

These teachings as well as the other cycles of treasures of the great terton Pema Lingpa contain numerous practices, rituals and instructions destined to bring fortunate sentient beings to liberation.

Credit: The primary source of information for this brief history is The Life and Revelations of Pema Lingpa, translated by Sarah Harding and published by Snow Lion. This book is highly recommended for a complete introduction to Pema Lingpa and his teachings.

Gangteng Rinpoche is the upholder of Pema Lingpa’s treasures.

Сollection of treasure teachings (gter chos) is an anthology of texts revealed by a particular tertön which may also include works written by the tertön, as well as supplementary material by other masters associated with the tradition.

Considered to be teachings by Padmasambhava,the treasures are placed first in the collection. Pema Lingpa’s ordinary works follow and constitute three volumes:

(1) a collection of Pema Lingpa’s ordinary compositions, Bka’ ‘bum yid bzhin gter mdzod, in vol. 13; (2) Pema Lingpa’s autobiography, ‘Od zer kun mdzes nor bu’i phreng ba, in vol. 14; and (3) an appendix to Lama Jewel Ocean in vol. 20, predominantly by Pema Lingpa. Ritual arrangements, composed by his subsequent incarnations, are placed in a single volume toward the end of the collection, Kha skong min byed dbang gi mtshams sbyor (Vol. 19). The texts in this volume were predominantly written by the Sixth Peling Sungtrul, Kunzang Tenpai Gyaltsen, and the Eighth Peling, Sungtrul Kunzang Dechen Dorje. Also near the end is a volume of liturgical materials, ‘Don cha’i skor bdud ‘jom sogs gsung (Vol. 18) by Dudjom Rinpoche, the editor of the present collection. These serve as ritual elaborations for a number of Pema Lingpa’s treasures. A hagiography of Padmasambhava, O rgyan padma ‘byung gnas kyi ‘khrung rabs sangs rgyas bstan pa’i chos byung (Vol.21) is found at the end of the collection. 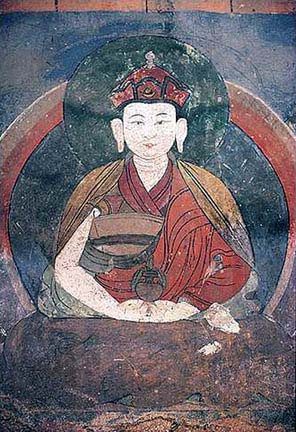 The Great Red Wrathful Guru, Necklace of Flames Revealed from the indestructible rock outcropping at Kurje in Bumthang

Wrathful Guru, Tamer of Beings Revealed from the throne-like base of Lion Cliff in lower Bumthang

Great Completion, The Union of Samantabhadra’s Intentions (Volume One)

Revealed from the stupa at Chimphu near Samye

Revealed from the Lion Cliff at Rimochen in Bumthang

The Great Compassionate One, The Lamp That Illuminates the Darkness

Revealed from the indestructible enclosure of the Copper Cave of Rimochen

The Diamond Necklace of Longevity Instructions

Revealed from a cracked rock in the variegated cliff in Lhodrak

The Most Secret Eight Transmitted Precepts, Mirror of the Mind

Revealed from Tselung Lhakhang in Bumthang

Revealed from the Meteorite Blazing Cliff at Mendo in Lhodrak

Revealed from the back gate of Tselung Lhakhang in Bumthang

Revealed from the back gate of Tselung Lhakhang in Bumthang

Revealed from the indestructible rock outcropping at Kurje in Bumthang

Revealed from Mendo in Lhodrak

Revealed from the red rock meteorite cliff in Yamdrok

Biographies of Pema Lingpa (and his subsequent incarnations)

Kila, The Most Secret Vital Blade

The Quintessence of the Mysteries of Luminous Space (Volume Two)

The Biography of Padmasambhava, A History of the Buddha’s Teachings

This collection was reproduced from a set of manuscripts preserved at Gangteng Monastery, sponsored by Her Majesty the Royal Grandmother and edited by the great Nyingma master Dudjom Rinpoche. It was published in Thimphu by Kunsang Tobgay in 1975.

This text is taken from “The Life and Revelations of Pema Lingpa” by Sarah Harding.