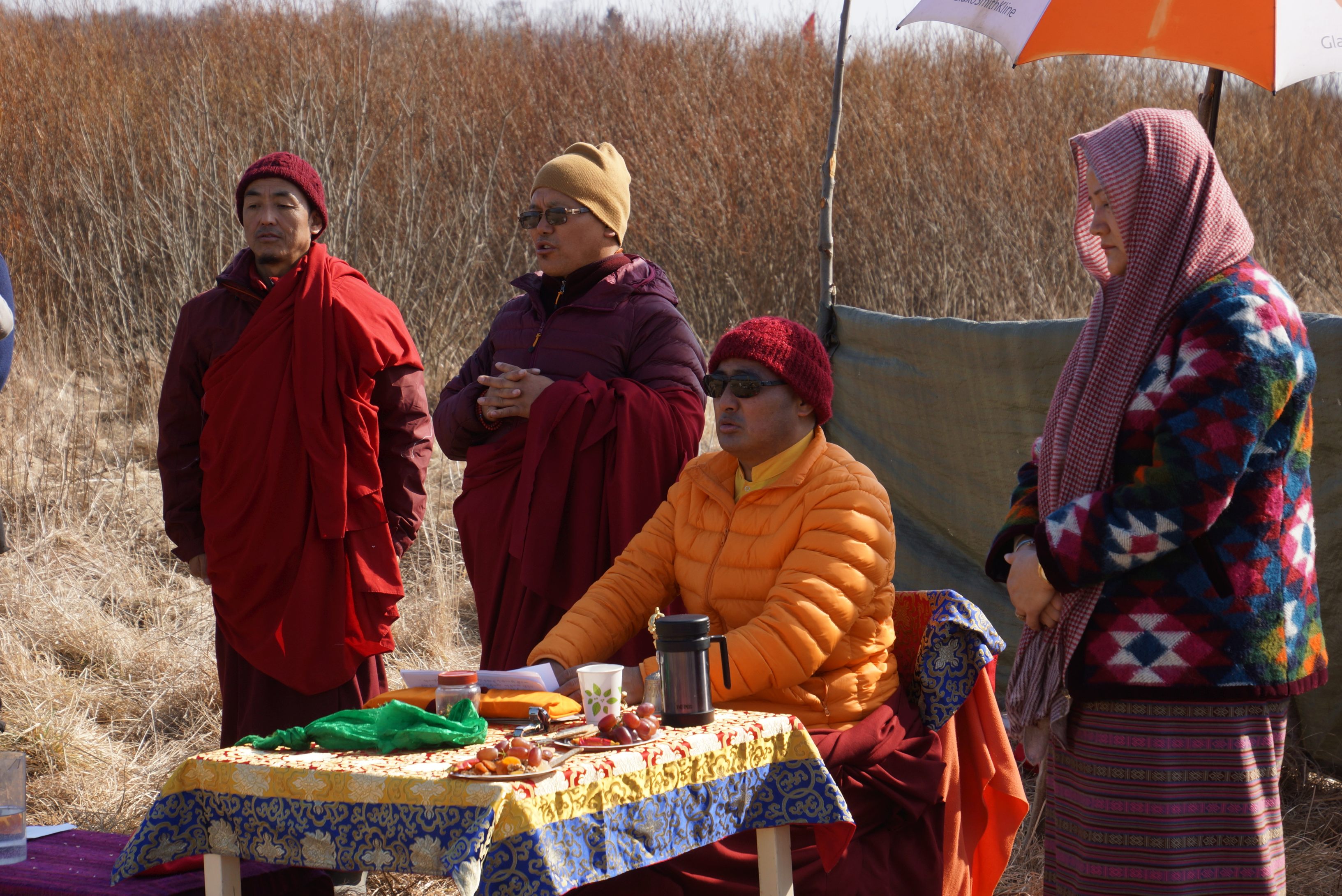 In accordance with the request of Gangteng Rinpoche, from 7th to 9th April 2018, Sungtrul Rinpoche, an emanation of Pema Lingpa, gave teachings and performed the earth ritual (sa’i cho ga) in the future retreat center’s land,  placing the naga vase in the middle of the 3-year retreat center building.

On April 7th in Tallinn, Sungtrul Rinpoche gave the Künzang Gongdü empowerment (Samantabhadra’s gathered intention, introduction to the nature of mind). This is the basis for all the future teachings in the Pema Lingpa’s tradition starting from the  Dzogchen preliminary practices, ending with the trekchö, thögel and bardo teachings. After that, on April 8th, Sungtrul Rinpoche gave the combined Hayagriva-Vajrapani-Garuda empowerment belonging to Dudjom Tersar in Umbusi in Põltsamaa county in the middle of Estonia, nearby the location of the future retreat center.

On April 9th Sungtrul Rinpoche performed the earth ritual ( the main part of this ritual is “requesting the land” – sa blang).

About the earth ritual

In Tibetan Buddhism, the earth ritual (sa’i cho ga) is an essential preparatory ritual to make the land suitable for the Vajrayana practice. Earth ritual is necessary for a variety of occasions, for example, before going to a retreat or while doing a spiritual practice session, marking the outer borders of the practice place, so creating a clean and perfect place – mandala. The transformation of the earth is also used for making a new place suitable for Vajrayana practice. This is what will be done in Umbusi Yeshe Khorlo’s retreat center’s land as well.

One part of the earth ritual is requesting the land from visible and invisible beings (sa blang). Visible beings are people to whom the land belongs, but a longer and more extensive ritual is associated with the invisible owners of the land. Both in Tibetan Buddhism and in many other traditions it is believed that the natural environment affects the lives and well-being of beings living in it, including humans. Earth and energies from the nature are called earth spirits (sa bdag), the ground is also considered to be the location of a serpent-like creatures, nagas (klu). If these energies or the invisible creatures are disturbed, this can manifest in the form of disasters in the lives of humans, or as obstacles in the form of natural disasters.

Different rituals, which create harmonious relationships between invisible spirits and people who use the earth, are used to balance these energies, or to calm down the spirits. Invoking the earth spirits is also related to the awakening of the Buddha Shakyamuni, while the Buddha asked the earth goddess to witness his awakening. The request of the Vajrayana Buddhist practitioner is similar here to the request of the Buddha – the main landowner is requested to accept the use of the land as Vajrayana mandala, and to become a protector of the Buddhist teachings that the spiritual progress will be swift on the blessed surface and the signs of awakening will manifest with ease.

With that, all preparations for the successful construction of the retreat center have been done and the building works may start.